On Monday 24th we had our year 1/2 welly walk. We walked down to Pamber Forest where we were lucky enough to be able to spend the whole afternoon exploring and playing. We had great fun being able to have this experience with the whole year group.

On our walk we discussed what we might see once we made it to the forest, we were hoping to see lots of different insects and plants. We certainly weren't disappointed!

When we reached our location in the forest, we were given freedom over how we spent our time. We participated in a wide range of activities, including making bug hotels, dens and drawing treasure maps in the mud. We showed the teachers and helpers how well we can work as team by pitching in new ideas and resources to help one another.

Our creativity is shown well in the pictures below of some of the final things we made together. 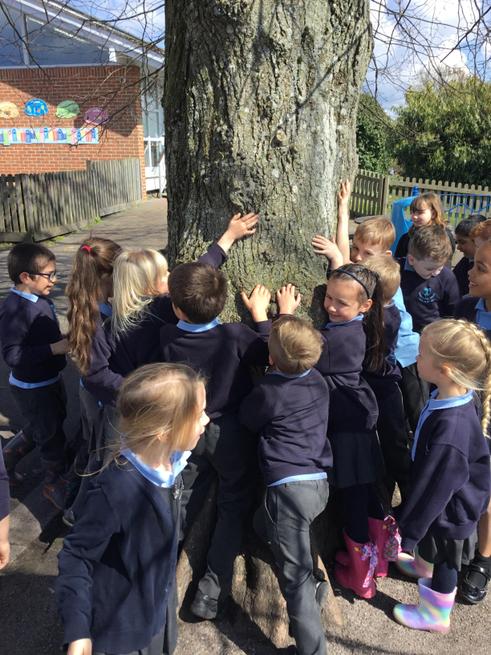 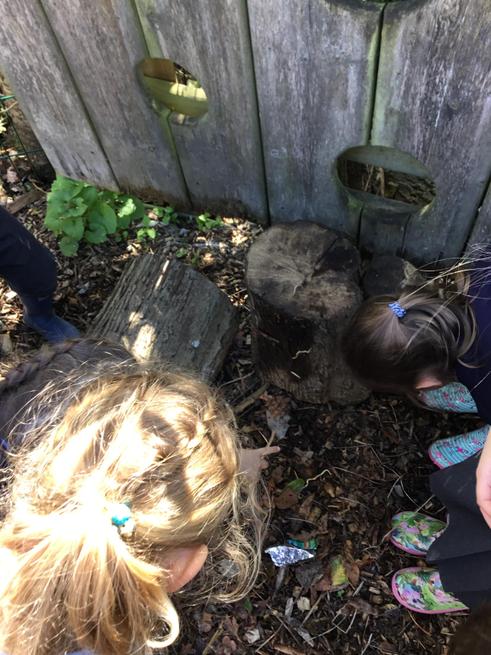 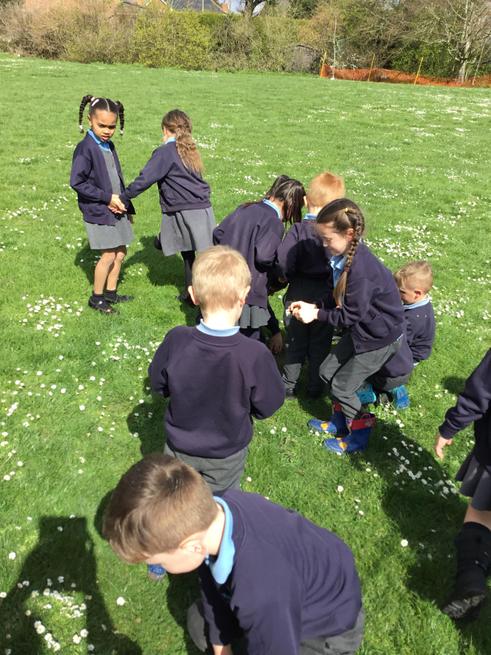 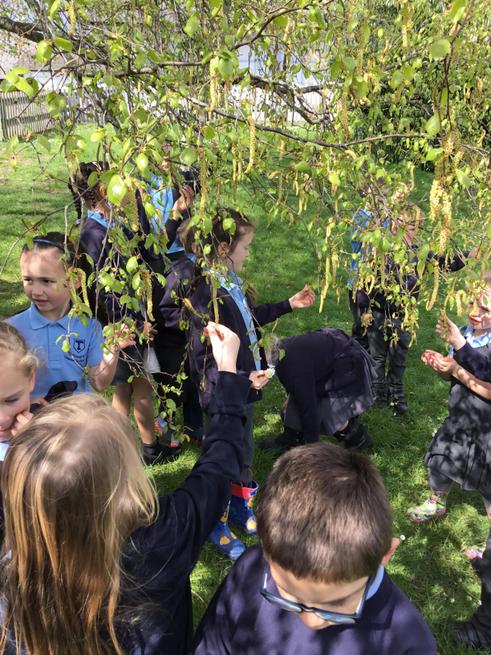 Thank you very much to any parents that helped to make this trip happen by volunteering to accompany us on the walk!

Yesterday, Starfish Class went on their first Forest School session! The rain certainly didn’t stop us! Amongst other little games, we built dens, fairy houses, sculptures and much more.

Have a look at some of our photos below. We can’t wait to have more sessions next academic year. Turtles Class will be going on their session next Wednesday (26th June)  and Sharks the Wednesday after (3rd July). 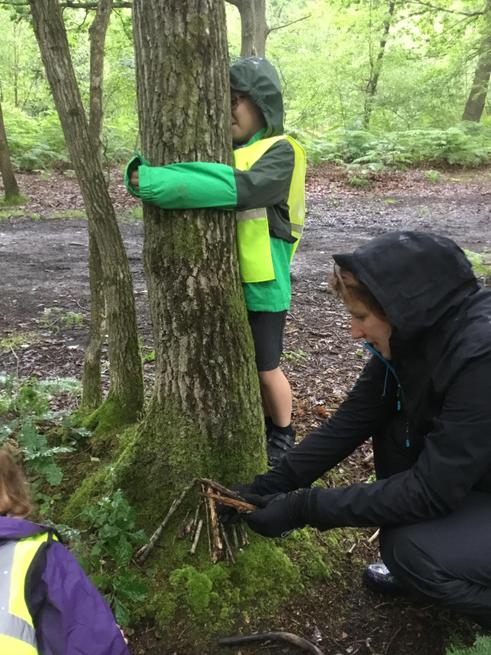 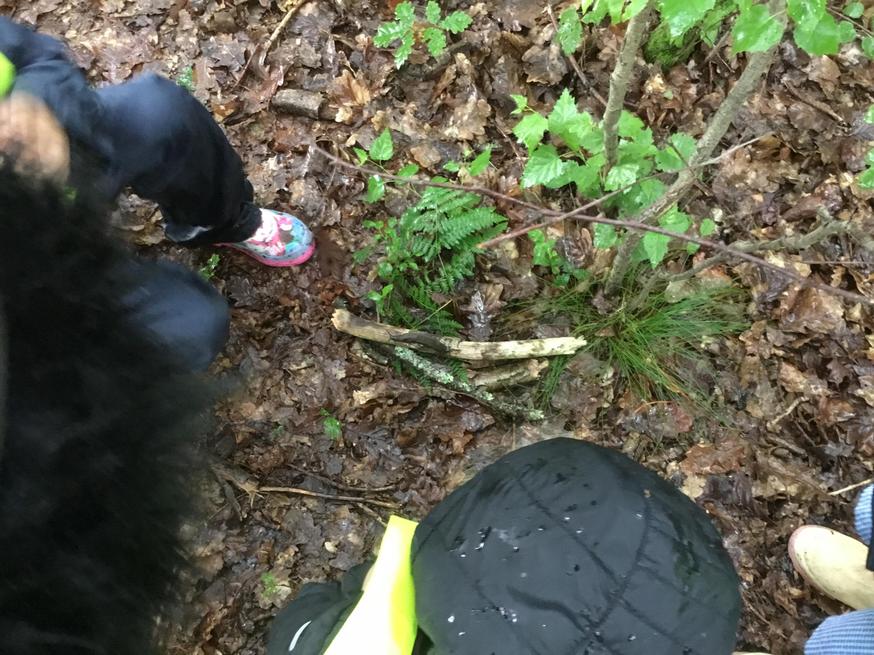 On Monday afternoon, we started our new Titanic topic. In the classroom, the children were randomly given a ticket to board the ship. The three tickets were first, second and third class. The hall had been set up to look like the three different classes from the Titanic.

* First class passengers were sat at a table, with flowers, table clothes and yummy biscuits.

* Second class passengers were sat on benches and were given a plain biscuit to eat.

* Third class passengers were sat on the floor in a crowded space and were given a rich tea biscuit to share.

(Some of the children were very disappointed with where they were placed!

The children then wrote about how they felt about the class they were put into. They need to empathise with the passengers that would have been on the Titanic.

This week in our Literacy lessons, the children have been exploring different types of poetry.

On Monday, the children investigated rhyming words. They were given the lines of the poem with missing words and they had to find the words that rhymed. Choosing their own animal, the children then wrote rhyming lines about it.

Next lesson, the children explored the poem 'The Owl and the Pussy-Cat' by Edward Lear. They acted out the story, created freeze frames and recited the poem to the class. The children had to think about the rhythm of how they read it and the rhyming words included.

On Thursday, the children looked at Shape Spring/Summer Poetry (clearly not inspired by the weather!). They created a mind map of key words related to the object that they were going to write about. For a challenge, the children had to think of adjectives as well as features of the object. Using their key words, the children then created their poem into the correct shape.

On Friday, the children were excited to be learning about a poem called 'Meet the Pirates'. As a class, we discussed the poem and thought about any words that we may have been unsure about such as 'navigate' or 'avast'. In their books, they then texted marked the poem to show the image that was created in their heads.

This week in maths, the children have been using their place value knowledge to think about how numbers are created.

Year 1 children thought about 2 digit numbers and created these using dienes to show the amount of tens and units. They then had to work out which number was being shown by the dienes in the picture. The children then practised saying the 2 digit number to secure their knowledge.

Year 2 children thought about the different ways in which they could create 2 digit numbers. They had to think carefully about the tens and units of the numbers. The children used a variety of resources to indicate the number shown.

All the children enjoyed playing the place value basket ball game which can be found at: https://www.topmarks.co.uk/learning-to-count/place-value-basketball

This week, in our afternoon sessions, we have been exploring all things related to the Garden and our Outdoor Learning Area.

* The children went down to water their seeds that they planted the week before. We were very excited to see some small shoots starting to grow!

* We were very excited to also learn some new songs related to plants and growing. We learnt songs such as:

And onions and corn and potatoes too,

* The children then created their art work ready for the large display in the hall. We used a variety of materials such as paint, water colours and oil pastels to create large flowers head, stems and the sky.

* Using their knowledge of how to prepare the soil and plant seeds the children came up with their own dance routine working in unison. The children thought of three movements that would represent the hard work of digging and turning over the soil.

The children then pretended to be seeds growing into a beautiful flower.

On Monday 29th April we had the opportunity to learn and play some cricket. Neil, from All Stars, explained to us what cricket was and asked whether we had played it before. Only a couple of children had. We learnt how to hold a cricket bat and then practised some skills. We all had a lot of fun and learnt some new skills we can implement into other sports if not cricket.

Our Trip to The New Forest Wildlife Park

On Thursday 14th March, Year 1/2 made the hour journey to the New Forest Wildlife Park. We were excited to see the variety of animals that were there. As we arrived, the children were full of anticipation. Our first encounter was with Hobbit the Barn Owl. The children found out lots of facts about Hobbit including that his dark eyes meant that he hunts at night and that he can turn his head ¾ of the way around! (We know how far this is as we had been learning about fractions in our Maths lessons!)

Next, we were guided around the park by our leaders who worked at the Wildlife Park. We saw a huge variety of animals, some who originally came from the U.K and others who had been brought over from other countries. Some of the animals we saw were:

* Wolves ~ there were 5 wolves at the park. We learnt about the darker wolves being males and the lighter ones the females.

* Wallabies ~ We were about to get up close to these creatures if we were quiet enough and we learnt about the similarities between these and kangaroos. The children found it funny that they can’t jump backwards!

* Other types of owls ~ The children enjoyed the Little Owl the most who scooted around the floor. Our guide was shocked to see one of them eating the hedgehog food.

* Otters ~ Some of the children had already decided that otters were their favourite animals. We saw otters that lives in different environments. Some had an inside pool which we enjoyed seeing them swim in and the giant otters lived outside ~ they were much bigger than we expected!

* Deer ~ We were surprised to see that the deer roamed the park freely although we couldn’t get very close as they were quite timid. The children were concerned to see that one looked injured! Our guide told us that he had hurt himself trying to get under a fence but that he was fine now.

There were many other species that we saw and we really enjoyed our trip out!

Year 1 and 2 spent the afternoon observing signs of Spring across the school grounds.

We spoke about the life cycle of a daffodil. On our field we noticed some daffodils were at the ‘Flowering’ stage of their life cycle and the ‘Seed Dispersal’ stage. We also noticed lots of other smaller flowers coming into bloom.

In the garden we came across a few signs of new life! Our strawberries look very healthy and our garlic is growing strong and tall! I’m sure we will be able to make garlic bread once it is ready to eat! We look forward to eating some yummy strawberries too.

We discovered many bugs and insects when searching through micro-habitats. Our search consisted of quietly looking in our pond area, under logs, in the grass and in shrubs and trees. Luckily enough, we saw lots and managed to take some photos. Some of them were far too fast for us though!

…Oh, and the lovely horses that live opposite the school!

Unfortunately not the ones with chocolate chips.

Some cookies are necessary in order to make this website function correctly. These are set by default and whilst you can block or delete them by changing your browser settings, some functionality such as being able to log in to the website will not work if you do this. The necessary cookies set on this website are as follows:

Cookies that are not necessary to make the website work, but which enable additional functionality, can also be set. By default these cookies are disabled, but you can choose to enable them below: